This week Danielle brings us the thrilling conclusion of the 1987 Hardy Boys novel Dead on Target by Franklin W. Dixon. The Hardys are on their way back to Bayport convinced that the infamous terrorist known as the Bullet is there to enact the opening night of his previous rehearsal bombing (no, a rehearsal bombing doesn’t make sense, but don’t ask questions). Back in Bayport, the Hardys and Frank’s girlfriend (or maybe Joe’s? Sam still isn’t sure) Callie go to the police. However, the new officer in town, Sam Butler, is not buying their terrorist rehearsal bombing idea, which is really the only reasonable reaction to their story. Undeterred, the Hardy’s decide to sneak into the mall at night to see if they can learn something. Fortunately for them, the mall is guarded exclusively by dogs for some reason, and even more bizarrely, Joe has brought a dart gun, since apparently every in this world just loves a worse version of a gun. While sneaking around, they stumble across the Bullet and instead of tranqing him, Joe shouts his name, alerting him to their presence and getting them all captured. Sam is unimpressed. The Bullet, equally as incompetent as the Hardys, merely ties them up in the mall basement near a pile of plastic explosives set to assassinate the not-yet-but-maybe-soon presidential candidate Walker. Why is this almost presidential candidate so important? Because something, something, anti-terrorism. Luckily, Callie was there with them and manages to escape and free them and Frank goes about disarming the bomb using the classic technique of a human pyramid. That was not a joke. With the bomb disabled, the Hardys still need to save Walker, for some reason, from the Bullet who surely won’t give up that easily. Will they succeed? Will Joe get revenge for the death of whatsherface? Is there a Lion King Mufasa’s death style scene? The answer to all these questions is of course yes, but it all happens in a way that only the Hardy boys can pull off: Hilariously.

This week Danielle returns to her teen detective roots with the Hardy Boys Casefiles book one, from 1987, Dead on Target by Franklin W. Dixon. Frank and Joe hardy are two young men who Sam cannot distinguish between despite Danielle’s instance that they are, in fact, very different characters. The book opens with a dramatic scene of Joe’s girlfriend, Iola, exploding in a car bomb at a political rally she was organizing for a presidential candidate. We cut back an hour and learn this rally is, in fact, a dress rehearsal for a political rally, which is definitely not a thing. After Iola gets explodified, Joe, who was a terrible boyfriend, is extremely distraught and Frank agrees to help him do what they do best: Incompetently attempt to investigate her murder until they luck into a solution. After talking to some people at the local mall, they’re attacked by unknown evil people with, hilariously, dart guns. They escape in the car of a government agent they met earlier named Mr. Gray. A brief car chase later, where Joe earnestly tries to murder some of their pursuers, and the Hardy bros are told to go hide in South Carolina while Mr. Gray and the secret government organization he works for, The Network, takes care of the terrorist organization that attacked them. The Hardys are not ones to listen to reason, so they muster all the hacking skills that existed in 1987, and hack into an airport computer to determine that Mr. Gray is headed towards London, and they follow him there. They quickly foil an attempted hijacking which, considering the terrorist weapons were a single grenade and a can of mace, wasn’t much of a threat to begin with. But the real mystery of this book, in Sam’s mind, is just one thing: How are these inexperienced bothers consistently able to insert themselves into a secret government anti-terrorism organization? And further, how has this terrorist organization, known as the Assassins, existed since the freaking Crusades? Unfortunately, the Hardys have no answers to these questions, but with any luck they may yet solve the mystery of who killed Iola, and bring them to justice. So join us for part one of this fast-paced reboot of the classic mystery series!

After tackling to very long books, Danielle and Sam need a break to recover. So, please enjoy this bonus episode about the Christopher Pike book Bury Me Deep that was released for our Patreon supporters. We’ll be back next week with your regularly scheduled nonsense!

It’s Sam’s turn in the Great Switcheroo to share the 1991 Christopher Pike book Bury Me Deep. Jean is your average horned-up teenage girl who was written by an author who’s definitely human and totally understands how human girls work. Jean is excited for a trip to Hawaii with her friends, but finds herself delayed a few days for reasons too stupid to be real. Finally on the plane to Hawaii, the boy, Mike, in the seat next to Jean dies violently, leaving Jean shaken. But there’s no time for trauma when there are cute boys giving scuba diving lessons at the hotel, so Jean puts aside her experience and tires to enjoy the time with her friend Mandy and also Michelle, the random girl who just invited herself along on the vacation and now spends all her time locked in their shared hotel suite bedroom having sex with Dave, the older of the two diving instructors. Jean starts having spooky dreams about Mike, and is drawn to a particular underwater cave off the Island of Lanai. When Jean recklessly dives to the cave alone she finds a human skull and promptly freaks out. Neither of the cute instructors, Dave or Johnny, believe she saw the skull, and upon investigation Dave can’t find it in the cave. Is jean falling apart from her traumatic experience? Are Dave and Johnny more than simply cute dive instructors, and what happened to their missing partner Ringo (yes, Ringo)? What does any of this have to do with Mike? Will Mandy ever be treated with respect in this book? Help Sam solve this mystery (spoiler, it’s not that mysterious) in the conclusion of our first Great Switcheroo! 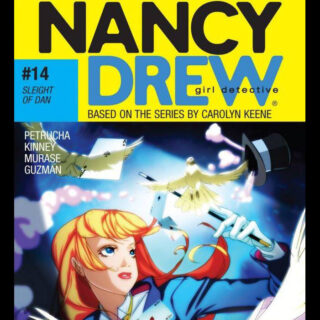 Danielle brings another Nancy Drew mystery to Sam with the graphic novel Sleight of Dan. The girl detective is back! Nancy Drew has a brand new mystery to solve, well, not so much a mystery as ruining everyone else’s good time. When a magician, Dan Deville, comes to town and makes his assistant really disappear, Nancy won’t rest until she’s figured out the trick and spoiled it for her friends. There’s a giant boa constrictor that doesn’t really matter, and a bunch of weird magicians who really should matter more, but Sam is focused on the real mystery: Where does Nancy keep getting all those phones, and is she the worst?

In this episode Danielle shares a bizarre take on the classic fairy tale with the film Red Riding Hood. If you thought that Red Riding Hood would be improved with the addition of a werewolf and a lackluster love triangle, than have we got a movie for you. While an adult Red Riding Hood descending into paranoia because anyone in her village might be the werewolf terrorizing her is pretty great, it pales in comparison to the crazed werewolf hunter Gary Oldman and his giant iron elephant oven (that was not a typo). There’s not a lot of plot to cover, but the abundance of insanity more than makes up for it. To understand any of this Sam and Danielle could really use the expertise of an astronomer, an anatomist, a cryptozoologist, or really all the help they can get. 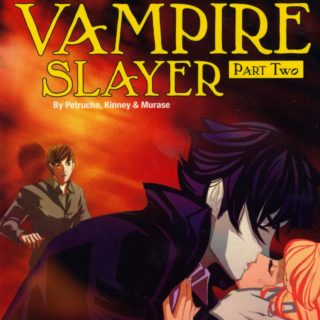 Danielle does her darnedest to make sense of the first two volumes of the graphic novel Nancy Drew Vampire Slayer. The famous girl detective is back in a modern take, and now she’s confronting the possibility of the supernatural in the form of someone who is almost certainly not a vampire. Join Danielle and Sam as they attempt to dive into this “mystery”, but find themselves instead concerned with the real mystery: The fate of Nancy’s dog.